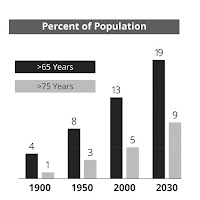 The percentage of the population that will be “elderly” is rising fairly dramatically. In 1900 only four percent of the population was over 65 and only one percent over 75. By 1950 it was eight and three percent, respectively. By 2000 it was thirteen and five percent and now it’s about fourteen and six percent. By 2030 it will be substantially more again.
There are many different concepts about aging but for our purposes we’ll consider aging gracefully or perhaps aging wisely. Most people would prefer to have a long life with the proviso that it is with good health while having some element of fun along the way. That will be the theme of these articles.
Older individuals have multiple age related impairments and they tend to have multiple chronic illnesses. The care of these illnesses is all too often far from ideal. America has the resources but healthcare delivery is dysfunctional at best. And of course we know that health care costs are very high. One of the keys is really good comprehensive primary care which all too many Americans just do not have. The other key is lifestyle modifications; I’ll deal with the latter in some detail in the articles to follow.
As we age, sort of like a car, “old parts wear out.” Most organ functions decline by about one percent per year. Of course there is great variation in this but that is a pretty good average. The decline starts at about age forty and probably much earlier and continues throughout life. Fortunately most of our organs have a huge redundancy and so we can afford these declines without any level of illness. But at some point the decline may get to the point where we have a functional impairment that can be serious. 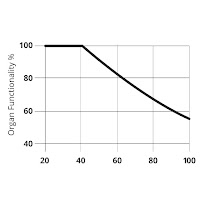 Hearing decline begins at about age 25 but is not noticed until much later.  Many will need reading glasses by age 40 even though having excellent vision for years; cataracts will occur later.  Balance, often not noticed until later, starts its inevitable decline early as well. Meanwhile internal organs including heart, lungs and kidneys are slowly declining and so too is brain function, especially cognition.
This normal aging process of old parts wearing out is universal, is progressive, and is irreversible, at least as we know of it today. Let’s use bone mineral density (BMD) as an example. BMD is easily measured to demonstrate the sturdiness of our bones – how strong they are. We start out in life with cartilage rather than bones but as we grow as toddlers, then as children, then as teenagers, calcium and other minerals along with a protein-collagen matrix are laid down in our bones and they become increasingly strong reaching a peak at around the age of twenty. Once that age and that peak are reached it can’t go up any further – that’s it. Then there is a plateau and at about age forty it starts to decline at the one percent per year rate.   Since women tend to live longer than men, in total more women than men will have a fracture at some point in their lives. We might just say that is one of the risks of living longer. 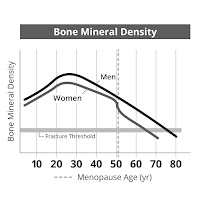 At age twenty men’s bone mineral density is, on average, higher than women’s. Nevertheless for women as for men the decline is about one percent per year. Menopause changes this; the rate of loss increases to perhaps three percent per year for a few years and then returns again to the one percent average decline until reaching osteopenia and then osteoporosis. There are three important points to be made here. If we live long enough, our bone mineral density will decline to a level where if we fall a bone fracture becomes more likely. Since women start at a lower level and because they have this increased loss of BMD during menopause they’ll reach that fracture threshold in life earlier than men. 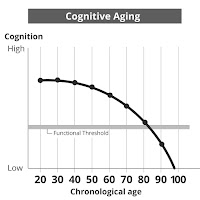 Cognitive function is another example; our brain loses some of its abilities as we age.   This loss of cognitive function over time should not be confused with the disease Alzheimer’s. Nearly everyone who lives long enough will suffer from some cognitive decline but only some will develop the disease known as Alzheimer’s. As with BMD, we reach our peak cognitive function around age twenty; it plateaus for about ten years and then starts the slow decline. Given the great redundancy in our brains, it is not noticeable for some time. [Figure modified from Science Magazine] Eventually we reach a functional threshold where our cognitive function begins to impair our ability. This becomes more apparent when an older person is engaged in highly technical activity, in very fast paced activities, or in stressful situations (emotional, physical or health related). Those challenges to cognition are less apparent when in highly familiar situations. 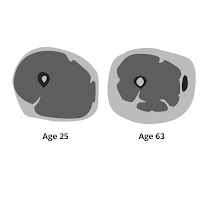 Muscle mass and strength decline in a similar fashion resulting in sarcopenia. Most people lose perhaps 30% of their muscle mass between ages 50 and 70. [Figure modified from the Buck Institute] Individuals that exercise find it takes more effort to maintain their muscle mass and strength but regular exercise and good nutrition have a significant beneficial impact.
This loss of about 1% per year is normal. In the following post, I will look at some of the proposed mechanisms for the aging process and then turn to how to overcome them.