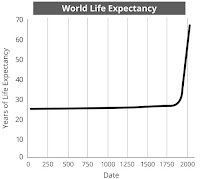 For most of recorded human history, lifespans did not change. Then it doubled in about 100 years.
At the time of Lincoln the average life span was 38 years; today it is about 78-80 years. But whenever it ends it is like a waterfall. Most people begin to die near to the expected point; the drop off in percentage still living declines precipitously. Fortunately, the waterfall has been pushed downstream by years and decades but eventually the time arrives.
Like a slow moving river, we go through life in our 20s, 40s and even 60s with little concern or thought about death. Then almost suddenly we realize it is fast approaching. Can we as individuals push our personal waterfall further downstream? The answer is yes but to do so effectively requires starting back when we were not really thinking about it – as young adults or even better as children. 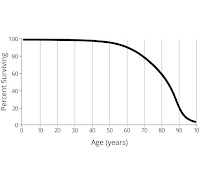 Why have life spans increased? Many would credit better medical care and certainly that has had a significant role, especially for the individual person. But most of the effect comes from public health: decreased maternal mortality at childbirth, reduced infant mortality, reduced childhood infection mortality due to vaccines, and greatly reduced deaths due to infections such as typhoid fever and tuberculosis as a result of safe water and sewers along with pasteurization of milk. More people have better nutrition and better housing. As to medical care, antibiotics are the prime example of an improvement that had a major impact on early mortality as has care of those with trauma. In other words, deaths that used to occur in infants, children and young adults are largely curtailed today with most deaths now occurring in just the older age groups and usually due to chronic illnesses – illnesses that for a large measure are related to a lifetime of adverse lifestyles. 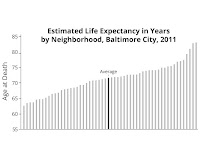 Longevity varies by location. Baltimore, Maryland is a good example. For a person born in 2011, it is estimated by the Centers for Disease Control (CDC) that the average life span will be about 72 years. But the variability based on location within Baltimore of that birth is striking. A person, likely white, born in an affluent neighborhood will live on average to 83 years. A child, likely black, born in a socially economically distressed area will die on average by age 63. Longevity varies by sex, race, location and many other factors but in the end it is only partly due to genetics, somewhat due to environment and very much due to how we treat our bodies over time. Of course, a person in a poor neighborhood has less access to good food, finds it unsafe to let the kids out to play, is chronically stressed just dealing with the bare necessities of life and is barraged with advertisements for tobacco and alcohol while drug dealers abound on the corners and violent trauma is commonplace. So it is not necessarily chosen behaviors but a lifestyle of necessity that determines variations in longevity.