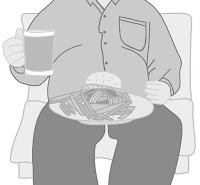 “Lack of activity destroys the good condition of every human being, while movement and methodical physical exercise save it and preserve it.” (Plato, about 400BCE)
A more modern statementwas in Time magazine,
“… the most effective, potent way that we can improve quality of life and duration of life is exercise. The price is right too.” (Oaklander, M., The New Science of Exercise, Time Health, Sept 12, 2016)
In an earlier article, I discussed nutrition and its importance as the first key in slowing the aging process and preventing late age-prevalent chronic illnesses. The second key is exercise, movement. We are a sedentary population; from bed, to breakfast chair, to car, to desk, to car, to chair for dinner, to sofa for TV and finally to sleep. This is completely different from our recent forebears who were up and about nearly all day long.
There is good experimental evidence regarding the critical role of exercise in maintaining good health. For example, when a group of mice whose genetics caused them to age prematurely were divided into two groups, one group that exercised three times per week and one group that was sedentary, the results were striking.  At the end of five months the sedentary mice were shriveled, had less functional hearts, a coarse and gray fur, thinned skin and hearing loss. The mice that exercised were healthy, indeed as healthy as normal mice, and despite their genetic predisposition to aging rapidly, they did not. This is another example that genetics need not be destiny.
“Sitting is the new smoking.” Sitting for long periods (over one hour) is a major risk factor for various diseases, poor health overall and for an earlier death. Chronic sitting increases death rates as much as smoking! Inactivity doubles the risk of general poor health. Just standing up rapidly activates the body systems that control blood sugar, cholesterol and triglycerides. Exercise improves the cells’ ability to respond to insulin; sitting increases the propensity toward insulin resistance (and later diabetes.) In essence the human body needs to move in order for its cellular and metabolic processes to work normally. Sitting has the opposite effect.
It is well known that exercise is valuable to heart health, that it reduces blood pressure, strengthens and preserves muscle size and strength, reduces blood sugar and body fat. It also preserves and amplifies brain function and size. In short,
“If it were a drug, exercise would be considered a miracle drug for health preservation.” (Austad, S, A Young Field about Growing Older: Six Ways Research Is Changing How We Age, Huffington Post, October 12, 2016)
Only a small proportion of Americans get the recommended levels of exercise per week – 150 minutes of both aerobic exercise (30 minutes five days per week) plus resistance exercises two or three times each week.  What is also important is not to just schedule some time each day – although that is clearly advisable – but all day long to get up and move about at least every hour for five-ten minutes. Remember that exercise improves all body functions, not just muscles. For example, it benefits the structure and function of brain, skin, heart, lungs, even eyes – every part of the body.
You already know that exercise has been well documented to help prevent the most important age prevalent diseases such as heart and lung disease, cancer, dementia and diabetes. This reduction in prevalence is “dose dependent,” i.e., the more exercise (up to a point), the less the disease rate. Too much exercise is not healthy but as a general rule, most individuals will never get to the “too much” level.
At the other end, is there a lower limit below which exercise is of no particular value? The answer is probably no but it is clear that even short bouts of activity are valuable. That said, it is certainly best to obtain the recommended intervals. Less is still valuable but more is definitely much better.
“Physical activity is one of the best modifiable factors for the prevention of noncommunicable disease and mortality.” (Eijsvogels, T, J of the Amer Med Assoc, 2015)) 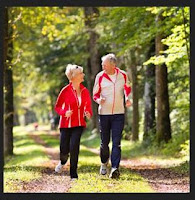 Here are the basics that everyone should follow. Start with aerobic exercise for thirty minutes five or six days per week. The aerobic exercise can be something as simple as walking at a reasonably brisk pace for thirty minutes. If you have a fitness monitor, try to achieve at least 10,000 steps per day. More would be even better.  Don’t sit for long; stand up at least every hour, more often if possible. Move about before sitting again. Perhaps you can set up your desk so that you can work standing up.
There is an advantage of some “extra push” every so often consistent with High Intensity Interval Training (HIIT.) Assume you are using a stationary bike. Set it to a reasonable level and exercise at a comfortable speed for two to five minutes to warm up. Then push as hard as you can for 30 seconds. Then return to the slower rate for 90 seconds. Repeat for eight cycles. Initially you may not be able to do but a few cycles, but with time, you can build up and increase the resistance level. During the rapid exercise, your heart rate will increase and you will find yourself breathing rapidly and deeply. At the end, you will feel tired and will have sweated. Repeat this program twice each week.
These are very potent exercises that offer great benefit in a short period. Among other things, HIIT leads to improved muscle growth and strength and production of growth hormone and myokines that are anti-inflammatory and which reduce insulin resistance and indeed increase insulin sensitivity so that blood sugar (glucose) can be better utilized within the cells.
Add in resistance or weight bearing exercise two to three times per week. If you want to increase your muscle mass and strength, it is best to push up to a weight that you can only do for up to 12 – 15 repetitions.  This pushing to muscle exhaustion both with aerobic exercise as part of HIIT and in resistance (weight) training recruits what are called the white fibers rather than just the muscle red fibers. It is this stress on the white fibers that leads to muscle strength and with it an increase in growth hormone.  You want the growth hormone effect to persist for a few hours so it is best to not eat a meal immediately after exercising. More specifically you want to not eat sugars or other easily digestible carbohydrates (such as in sports drinks) that once absorbed will lead to an insulin spike. Insulin levels and growth hormone levels counter each other. So, if insulin rises, growth hormone levels will rapidly decline negating the effect you worked so hard to achieve with exercise.
Remember – this is information, not medical advice. For that you need to talk with your personal doctor or nurse practitioner. There may be some approaches mentioned here that the doctor will discourage you from doing based on your health, so do that review now. Start out slowly; there is no need to create sore muscles. Find a setting that feels appropriate for your needs and personality. Although most people find exercise stimulating and relaxing, it may not seem that way at first; there may be an emotional barrier that needs to be overcome. A personal trainer might be very valuable, especially at first. He or she can give you good advice, help you devise a program that works for your needs and personality and can “keep you accountable” – in a nonjudgmental manner. Remember, getting started now will lead to benefits that compound over time just as a monetary investment for retirement compounds greatly over the years. So start now.
It is worth repeating that sitting is unhealthy. Getup. Move around. “Sitting is the new smoking;” don’t let it get you.
Stephen C Schimpff, MD, MACP, is a quasi-retired internist, professor of medicine and public policy, former CEO of the University of Maryland Medical Center and author of Fixing the Primary Care Crisis and Longevity Decoded – The 7 Keys to Healthy Aging