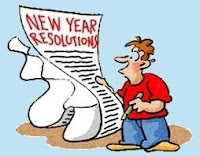 It is just about the first of January so this might be a good time to think about New Year’s resolutions related to health and wellness.
But first where did the concept of resolutions begin? We know the Babylonians used them in about 2,000 BC during the spring planting time. In their system they promised the gods to pay their debts and to do well by others.
Many cultures worried that the sun would not come back after the winter solstice. Perhaps the days would stay short or even get shorter. So, they prayed to the various gods to have the sun return.

Julius Cesar started what we know today as the solar calendar. January was the first month and it was named after the god Janus who was two-headed. He could see the year to the rear and the year ahead. He was the god of doors and arches because, again, he could see forward and back. He was also very importantly the doorkeeper to heaven. So, the Romans promised Janus with resolutions of good character and to be good to others.
In the Jewish tradition in the past and still today one spends the time from Rosh Hashana (the Jewish New Year) through Yom Kippur (the day of atonement) in prayer and reflection. Is it a time to ask forgiveness and to grant forgiveness and to look toward how one can do better in the coming year.
As the Roman Empire embraced Christianity, the Roman form of resolutions was discarded in favor of reflecting on past mistakes and resolving to improve over the coming year. In the middle ages, the knights took what was known as the “peacock oath” – to maintain the tenants of chivalry.
Today most resolutions are not a compact with a God but rather with one’s self; the resolutions are mostly secular and focus on self-improvement.
One might think it easy to keep a resolution that you have created for yourself; but it is not. In a 3,000 person poll a few years ago, fifty-two percent said at the beginning of the year that they were confident that they could keep their resolution(s.) However, eighty-eight percent failed. One technique that did help with success was to tell the resolution to others, to make it public.
Since most of us would like to remain as healthy as long as possible and with that perhaps live a longer time then may I suggest that you consider “The 7 Keys to Healthy Aging” that have been noted here and there in these posts. Remember that they all involve lifestyle modifications toward good nutrition, regular exercise, stress reduction, enhanced sleep, no tobacco, intellectual challenges and social engagement. For more see “Longevity Decoded – The 7 Keys to Healthy Aging”
As a resolution or two, consider to eat modestly, eat a wide variety of vegetables and fruits, and cut way back on sugar and white flour. Do not forget that healthy fats are important; they can be found in foods such as fish, nuts and seeds, avocados and olive oil. Include a long period of time between the last meal of the day and the first meal of the next day. Breakfast is “breaking the fast” and if that fast can be at least twelve hours that gives time for the cells of the body to do repair and maintenance, a very important function.
As for exercise, it is worth doing both aerobic and resistance exercises on a regular basis. Just walking for thirty minutes five or six times per week is sufficient for aerobic exercise and doing some form of resistance exercise two or three times a week rounds it out. Sone high intensity interval aerobics twice a week will further augment value. There are many resistance exercises that one can do at home such as the plank, sit-ups, push-ups, and squats but it is worthwhile going to a local fitness center to get a more well-rounded muscular work-out. Push your muscles to exhaustion by 12 to 15 reps; take a break and repeat three or four times.
Reducing chronic stress is absolutely essential but under emphasized. Among the possibilities are meditation, yoga, tai chi, massage, exercise again and deep breathing.
Most people do not get enough sleep. Adults need about seven and half hours per night, more as an adolescent. This is when your brain cleans out toxins and organizes memory and sort of tamps down the negative emotional issues of the previous day or weeks. Commit to getting good sleep and in part do so by keeping the bedroom dark and quiet with no light or sound interruptions by cell phones, TV sets, etc. In the time before going to bed, avoid overly stimulating movies or TV shows.

It is essential to have no tobacco at all. Those who smoke have about a decade less longevity. IT is not just lung cancer but many cancers and especially coronary artery disease and stroke. For the 20% of you who still do smoke, look for a smoking cessation counselor who can give you the assistance you need.
The five keys just reviewed go for all parts of the body. The brain however needs those five plus two more. These are intellectual challenges and social engagement. Like any other organ it needs to be used to be maintained and strengthened. This might be with music, art, dance, learning a new language, whatever, as long as the brain is kept active and stimulated. As to social engagement, humans need to interact with others in an effective manner. The simplest approach here is to make and keep your friends.
So, there it is, some health and wellness ideas for you to consider for  New Year’s resolution(s). Remember – do not try to do too much. Do not set yourself up for failure. Maybe you want to commit to going to the fitness center three days a week. Maybe getting out more with your neighbors and by interacting in various activities. Maybe working on better sleep. Whatever it is remember to say it out loud to others that this is something that you are going to be focused on. Your success rate will be much better. Making progress on any of these will benefit your health now, assist in preventing the onset of disease in later years and add to your longevity. Best wishes for your resolution successes.